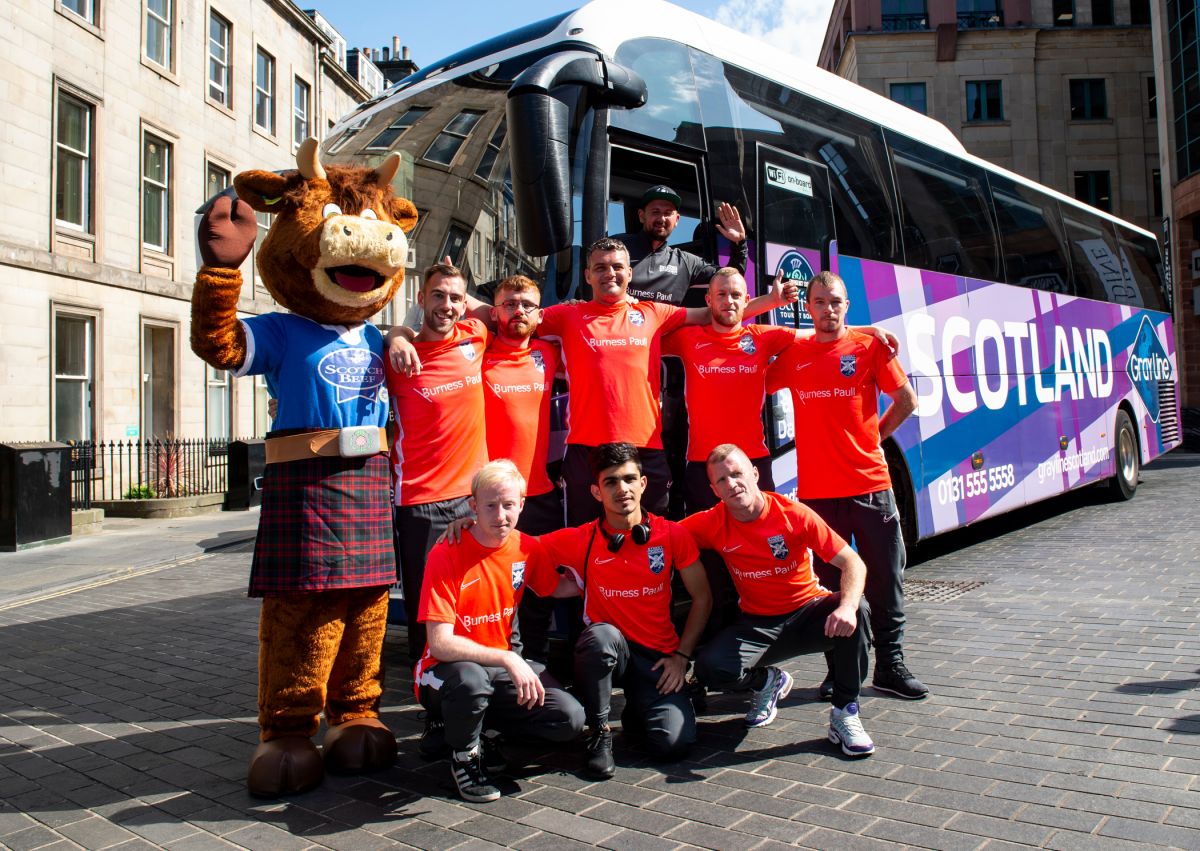 Yesterday the flags were flying as players from Street Soccer Scotland set off on their journey down to Cardiff to play in the Homeless Wold Cup 2019.

Bringing together players from over 50 countries from around the world, the annual tournament is seen as one of the most inspiring festivals of football there is, with all those taking part having faced homelessness and social marginalisation and working to overcome the challenges they have encountered.

Team Scotland are joined on their tartan bus by those from the Indian side, who have been visiting Edinburgh and Glasgow this week as part of a cultural exchange between the two countries.

While the Scottish team is made up of players from Street Soccer Scotland, a social enterprise using football as a medium to help change the lives of disadvantaged people throughout the country, the Indian team is put together by Slum Soccer, a parallel organisation working throughout India.

Throughout their time in Scotland, the team from Slum Soccer have enjoyed true Scottish hospitality, with the sides joining together to play friendly matches, visit Rangers FC at Hummel Park and experience a very lucky spell of weather allowing them to swim at Portobello beach. Last night the teams came together for an evening of celebration at the offices of Burness Paull, longstanding Street Soccer Scotland partners and sponsors of Team Scotland, through the Burness Paull Foundation.

The friendship between Street Soccer and Slum Soccer will not end when the tournament is over though, as the Street Soccer Women’s Team will embark on the Friendship Tour in September, when they travel to Nagpur to experience what life is like in India and play some football matches with players on the Slum Soccer programme.

“The opportunity for the players of the Scotland and India teams to not only take part in the Homeless World Cup but to also spend time getting to know one another, experience each other’s culture and visit places they previously hadn’t imagined possible is something really amazing. We work closely with Abhijeet Barse, Co-Founder and CEO of Slumsoccer and his team in sharing experiences and our coach Andy Hook regularly travels to India to help out the project there, and so we have strong ties, demonstrating the power of football in helping overcome some of the challenges social exclusion brings.”

“We enjoy a very close relationship with the team at Street Soccer Scotland and were delighted to wave them off on their journey down to Cardiff. We are very proud to be associated with Street Soccer and all the fantastic work they do, and look forward to following these inspirational players as they take on the rest of the world in the tournament.

Meeting the players and staff from Slum Soccer has been fantastic, and seeing the friendships formed between the two teams, overcoming language barriers and demonstrating the power of sport in bringing people together is really something special.

Everyone at Burness Paull will be cheering on both teams this year and I’d encourage everyone to get behind the Homeless World Cup and be inspired.”